What is a Geothermal Heat Pump in Layman’s Terms 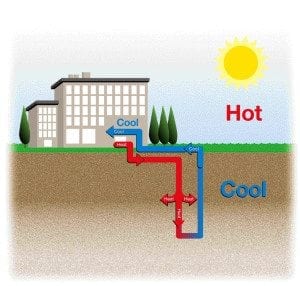 If you walked into a basement of a house that has geothermal heat it would not look much different than a house that has an electric heat pump in it. It will have a blower motor cabinet, hospital a cabinet with the evaporator coil used for air condition but also used for heating when refrigerant reverses itself. It will have a grid of electric heaters such as a 10 Kw or 15 Kw. What is different however are the two flexible water lines that run to the furnace. These are the lines that are buried underground in either a vertical or horizontal loop. What makes it more efficient is the temperature of the water moving across the coil in the heat transfer process. Instead of having an outside heat pump with compressor, condensing fan and motor, the compressor is located inside and the coils are water cooled rather than air cooled. For people that are familiar with an old refrigerator that had a big coil on the rear of the unit, that was the condesnor coil where air traveled across to cool the refrigerant down.

Traditional the tonnage on most houses are figured in the cooling load but with water source geothermal the tonnage is derived from the heating load. For example a 2800 square foot home being built new would have a four (4) ton load with conventional system but with a Geothermal system it would be five (5) tons. We have found that variable speed gas furnace with a high rated SEER air conditioning system would cost about the same as a geothermal system. The extra cost is the vertical drilling which will run approximately $2,000 a ton or a total of $10,000. Of course with the 30% tax credit you will receive until 2016 this pays for the drilling. This is not an itemized deduction it comes right off your tax liability. What it comes down to if you are in a area where there is no natural gas and only electric Geothermal is the way to go.

Years ago in the 1950’ and 1960’s Carrier made a Weathermaker system that used the same technology. Rather than having loops when the system came on water from you home would run over the coil. This is when water was very, very cheap. They were nicknamed the “water waste systems.” We tore a bunch of these systems out in the 1980’s. Many of the homes behind Del-Fair shopping center in Delhi had these systems. There was also a subdivision in Pleasant Ridge.